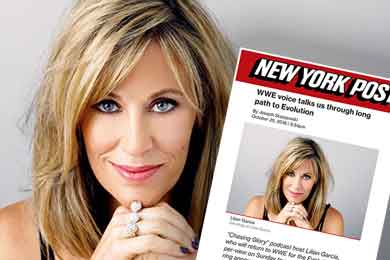 Lilian Garcia, who will return to WWE for the Evolution pay-per-view on Sunday to reprise her role as a ring announcer, tackled some Q&A with The New York Post’s Joseph Staszewski.

Q: You were there for many stages of the evolution of the women in WWE. Obviously there are easy difference to see in just match times and how they are presented; is there something that really stands out to you watching the product now for someone who was around it a lot closer than an average viewer?

So, when they were given a chance, then all of a sudden it was like, whoa, wait, these girls, they can carry a match, they can carry a Royal Rumble match going over the top rope with no different stipulations than the men. They can do the Elimination Chamber match, they can do a ladder in the match, Money in the Bank ladder matches. It was just so impressive to see the work and that was all because they were given an opportunity.

Q: What do you think was holding this back from happening earlier? Society has changed and women in sports have changed. Was there anything else holding back that change?

A: So, it is society. I don’t think WWE was intentionally doing anything to harm the women or anything like that. It’s not just WWE that’s changed. Look at the movies with women. Now you have movies that are led by women. They are the stars of the movie. It’s not just like the man is the lead and then you have the female being the co-star. You have the female that is the lead. Same thing with the Me Too movement, it was just a whole society that was ready. It exploded at the same time because you just couldn’t hold it back any more.